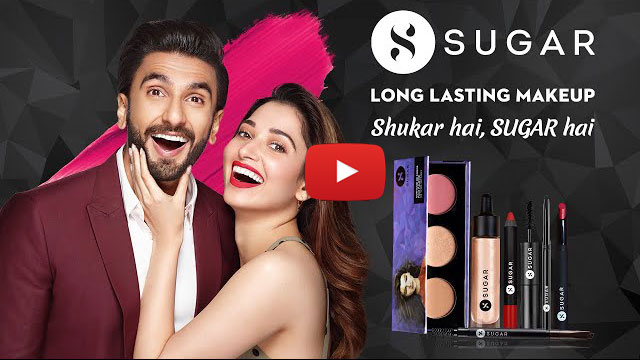 Directed by Abhishek Varman, SUGAR Cosmetics has created the TVCs featuring Ranveer Singh and Tamannaah Bhatia as the face of their campaign. The TVCs revolve around the brand’s newest campaign “Shukar hai SUGAR hai” which is witty yet catchy. The first commercial which was released earlier this month captures a fun banter between the two when Ranveer brings Tamannaah home to meet his family for the first time. The commercial highlights the brand’s USP of transfer-proof lipsticks.

The #ShukarHaiSUGARHai campaign concept & script has been envisioned and executed by the in-house team at SUGAR Cosmetics. Being part of the Cheil Worldwide network, EC Studios was onboarded as a production partner & created the films end-to-end, from shoot to execution to post-production.

The commercial has been released on television, OOH, print, radio and cinema. This will be further amplified across various mainstream digital, social media channels, OTT & various retail touchpoints. The TV Commercial will be aired nationwide in 10 languages including Hindi, Bengali, Kannada, Marathi, Tamil & Telugu across 50+ prime electronic channels. The OOH campaign will go live pan-India with focus on key markets including metro cities and major Tier I & II cities.

“The campaign #ShukarhaiSUGARhai is an attempt to connect with our audience and celebrate the many different situations that the brand’s core audience finds themselves in when SUGAR always has their back, no matter what surprise comes their way”, said Resha Jain , Vice President, Content Marketing; SUGAR Cosmetics. “The commercial talks about the benefits of SUGAR Cosmetics products without mentioning the benefit, in this case, the lipstick that doesn’t transfer or come off easily in a light-hearted fun way. EC Studios team was aligned with our objective and clearly understood the creative demands, the fact that the SUGAR consumer is bold and fun-loving and has delivered the best of their work. The raging feedback and views we garnered digitally and offline for the #ShukarHaiSUGARHai campaign, further echoes the successful outcome we have had.”

“Oh, what a day it was when we shot for these ad films! Extremely exciting, loads of stress, but super pumped altogether by the energy around. Yes, too many emotions as we wanted to deliver the best of our work”, said Meera Ghare, Vice President, Account Management, EC Studios. Onboarding Ranveer and Tammanaah as the brand evangelists was a great strategy by SUGAR Cosmetics, to connect to its target audience, particularly with Gen Z and millennials. Vineeta in a guest appearance totally added the charm to the film. We are extremely happy that SUGAR Cosmetics gave us this opportunity as the outcome is nothing short of perfect. We are sure that these ad films are just the tip of the iceberg and we’re looking forward to working on many more campaigns with them.”

Followed by a $50 million Series D fundraise led by the Asia fund of L Catterton, the largest global consumer-focused private equity firm in June ’22, SUGAR recently announced Bollywood Superstar Ranveer Singh as its newest investor last month. Some of the other investors backing the brand include A91 Partners, Elevation Capital and India Quotient. With a physical presence across 45,000+ retail touch points in more than 550 cities, the company sells a vast range of coloured cosmetics such as base makeup, lipsticks, eye makeup and skincare, both online and in brick-and-mortar stores.

SUGAR Cosmetics, a cult-favourite amongst Gen Z and millennials, is one of the fastest-growing premium beauty brands in India. With its clutter-breaking persona, signature low-poly packaging and chart-topping products, SUGAR is the makeup of choice for bold, independent women who refuse to be stereotyped into roles. Crafted in state-of-the-art facilities across Germany, Italy, India, USA and Korea, the brand ships its bestselling products in Lips, Eyes, Face, Nails & Skin categories across the world. With a cruelty-free range that is high on style and higher on performance, the brand is obsessed with crafting products that are a perfect match for every Indian skin tone across seasons and around the calendar. Backed by the trust of marquee investors and the love of millions of makeup enthusiasts, SUGAR Cosmetics is rapidly scaling its physical presence with 40,000+ retail touchpoints across 500+ cities and a mission of reaching the doorstep of every makeup user in the country.